Would you pay 3 dollars per month to get an undo feature in your favourite blogging platform? I wouldn’t, but this is what Twitter is proposing in their new tiered service, Blue. Ok, I’m ranting a bit, but there isn’t much more in Twitter’s proposition. On the other hand, how about using volcanoes to mine Bitcoin? Intrigued? Spare a few minutes and get your curiosity satisfied in this fortnight’s MV Journal edition.

I’m a technologist at heart and early adopter whenever I can, so when Twitter came about to my attention, I had to get in. The premise wasn’t strong, but users were piling up in the queue for a registration form.

They called it “microblogging”. A minimal amount of characters, 140, was the limit of a “tweet”. Since my first one, I was amazed by the lengths users took to get their thoughts compressed in that tight character space. Since then, Twitter added 100 more characters to the limit and changed a few rules to avoid accounting for attached media or special characters. Twitter “@” ‘s or “handles”, which refer to unique user names, happily subject themselves to a procrustean bed of content by feature, and despite my beliefs that the product didn’t have a chance as a business, they still push on, 15 years later.

To be fair, one can use Twitter only as an amplifier for full-length content. A headline plus a link or, more recently, an integrated video can make the dues and point users to a business or content provider. This is probably the best hook for businesses paying something for the service, and it’s the most significant slice of revenue from Twitter, albeit it isn’t enough.

Layoffs and cutting fat down was another tool that Twitter had to use a few years after going public. The market needed a signal that Twitter wasn’t only a flashy service with a dot-com fate, and management complied, cutting Vine and trimming down the payslip sheet.

It’s hard to make money @Twitter even when they are a source of constant social noise and publicity broadcasting from many celebrities and politicians. One should expect that publicity and promoted content could cover the expense, but as it seems, it isn’t enough. With 86% of the revenue stream coming from advertisement, the formula needs to change, especially when huge markets like India need constant political care has one can see by the recent authority incursions into Delhi Twitter offices.

But growing the “Data Licensing and Other” slice has been very elusive to Twitter management. Vine and Periscope failed where TikTok and others are reaping success. It’s not easy to pinpoint and capture a market, but Twitter’s track record shows that something has to change with the administration of new features and services. With Twitter Spaces, the company reacted quickly to ClubHouse. The latter revealed a Blue Ocean in the social communication segment, taking advantage of worldwide Covid lockdowns that prevented more or less regular social gatherings and introducing respected speakers to the public in a friendly open discussion format. Twitter Spaces is just a clone, but with a whale behind it. The user base is already available, and it’s “just” opening the doors for the users while taking feedback and building on top. One can see the virtuous cycle or product building, but there aren’t any public plans to get revenue from the product ( Clubhouse faces the same issue ).

And after many years of a “free” Twitter, management finally decided to create service tiering with Twitter Blue.

Paying approximately 2.9 US dollars per month, you’ll get an unimpressive feature set that includes an “undo” action within a 30-second interval if you want to review or remove your tweet and something similar to a “background theme”.

It’s hard to understand why users would pay for such an underwhelming feature set. Twitter is far from the customer discovery phase and has a market ripe for revenue extraction, but it still plays with the product as an early-stage startup that doesn’t know where to find customers and how to get them hooked. It’s even harder to understand how a feature like Spaces doesn’t get any revenue stream plan and could easily be included in a Blue subscription for broadcasters.

Maybe I still have my bias affecting how I see the company’s efforts, but I’m guessing that Blue will tank with the global user base while Spaces has obvious potential to grow with a solid revenue stream.

One can see the failure to innovate as well. Pushing feature clones to the market as fast as possible is a pattern that Twitter also adopts to overcome the lack of new ideas. With Fleets(https://help.twitter.com/en/using-twitter/fleets), we’ve seen the deployment of what looks like a universal pattern in social applications: posts with a deadline. As a result, Spaces was launched faster than the previous clone features, and we might see this copy/paste action repeated when a new service grabs the crowd attention.

As a final thought, the risk of losing advertisers isn’t tiny, and I’m sure that some investors are seeing “it coming” if nothing is done to lower the percentage of the ad revenue stream. With the last [iOS privacy update], Facebook saw a sharp decline of users that share their personal information with third parties. This update will also affect some of Twitter’s targeting and within a valuable ensemble of users. Blue is probably the result of some activist investors who don’t want to sell out and push for new solutions that spread the risk but far from a good solution. Instead, it should invigorate the investor base to find a new vision for the company.

If you browse the latest news from El Salvador, you’ll probably find many references to their current President, but with less than stellar opinions from the media. Central and South American politician stereotypes share many undesirable features, but “populist” will take the lead. Mr Nayib Bukele is no different. A quick search of the most relevant news at The Economist predicts a young dictator in the making. Winning the presidential election some months before celebrating his 38th anniversary, Mr Bukele is making the news this time after a bold move with a hard to avoid technology these days.

Tying it up with our previous article, the tweet below comes directly from Mr Bukele, announcing that Bitcoin is legal tender henceforth within El Salvador borders. 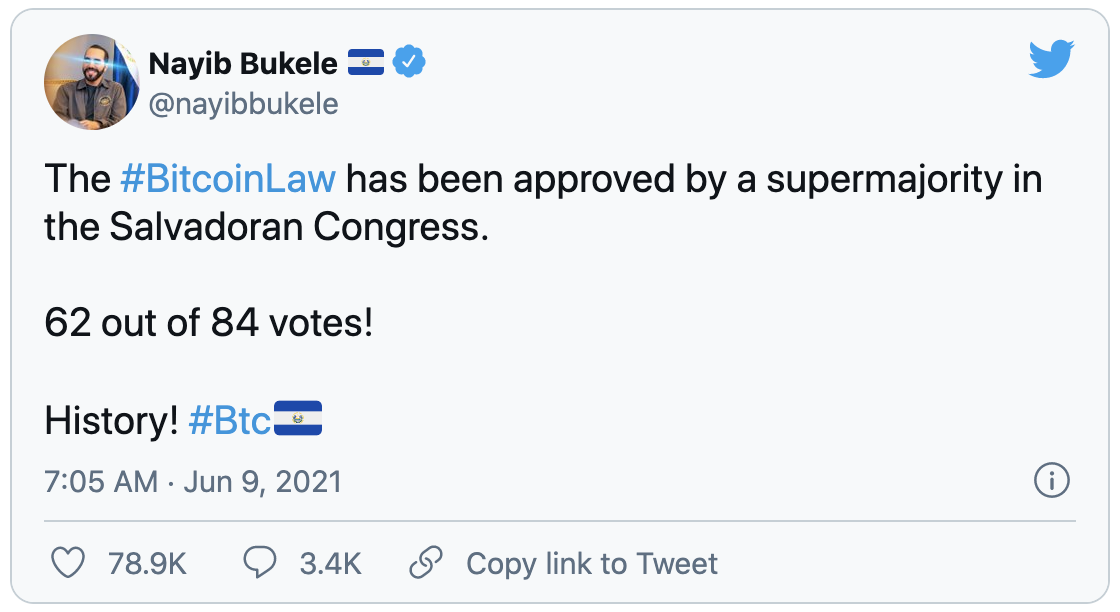 While some other countries are preparing to ignore or forbid one of the most important digital currencies globally, El Salvador made it legal and part of its economic cycle.

One still has to expect what this means for countries that do business with this Pacific bathed paradise. Still, for a nation that sees an annual remittance of approximately 21% of the GDP, the digital currency might break many barriers for El Salvadorans that don’t have a bank account ( 70% according to Mr Bukele ) and rely on commission-hungry services that convert and send credits inbound.

El Salvador might become the first test-bed for digital currencies, and I, for one, am eager to see how foreign companies such as McDonald’s or even HSBC are going to adapt to an environment where digital currencies can be used to pay your burger or your mortgage.

The expression could be applied to Mr Bukele if one follows the media, but this isn’t what we want to talk about. Bitcoin has a heavy energetic bill, and broad estimates point to a value that goes well beyond El Salvador’s requirements. So how can El Salvador make up for Bitcoin’s energy deficit?

El Salvador already operates a geothermal facility network that extracts energy from volcanoes, pouring it into its electric grid, roughly generating 26% of the countries requirements.

It’s far from existing Bitcoin global energy requirements, but the President wants to spend some of the geothermal production in mining operations and picking those elusive last millions of coins that are up for grabs.

Mr Bukele might be a mad genius who will take El Salvador to heights that the country never saw, but one needs to remain rational and see that the country’s economic path is filled with landmines, especially one that wants to strike a deal with the IMF in the short term. Fun and risky times ahead for sure.